WS2813 LED is a revised version of IC WS2812 which adds the feature of the break-point continuous transmission signal.

WS2813 intelligent control LED light source which integrates the control circuit and the RGB chip into a 5050 component package.

The protocol for the transfer of data uses a single NZR communication mode.

The DIN port receives data from the controller after the pixel power-on reset, the first pixel collects initial 24bit data and then sends it to the internal data latch, the other data which is reshaped by the internal signal reshaping amplification circuit which is sent to the next cascade pixel via the DO port.

After transmission signal decrease to 24 bit for each pixel.

The BIN receives the data signal and then compares data to the DIN side after 24bit data phagocytosis, if DIN does NOT receive the signal, then switches to BIN for receiving the input signal, ensuring that any damage to the IC does not affect signal cascade transmission.

Make sure that you have kept the BIN in receiving signal until it restarts after power-off.

The control circuit and the LED, both share only one power source.

The control circuit and RGB chip are integrated in 5050 components, to form an external control pixel.

Using the built-in signal reshaping circuit to achieve the signal waveform shaping, and no distortion of waveform of the signal takes place.

There are built-in power-on reset and brown-out reset circuits.

In the serial cascade interface, receiving and decoding data depends on a single line of signal. While in dual-signal wires version, its continuous transmitting signal break-point.

This LED strip is the old variant with an outer IC, for which most of the part is made with DC12v flexible strip light, has just one signal wire.

One IC controls 3 LEDs, the 3LEDs perform as one single pixel, they always change same color at the same time.

They are cut able per 3LEDs as one pixel, which means even you break it into 3 LEDs, light still works.

However, it is full-grown for a considerable length of time. 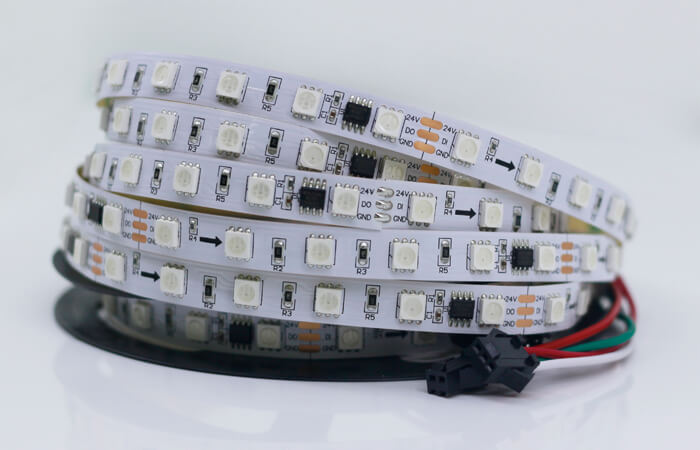 This IC is a 3-channel LED driver control circuit, with brilliant advanced port information hook and sign reshaping intensification drive circuit inside it.

Almost the same with WS2811 but with the features of breakpoint continuous transmission signal, which means any failure pixel won’t affect the following pixels. (It means pixel, not LED in which 3 LEDs are counted as one pixel).

In WS2811, if once pixel fails, the following pixels don’t work.

These signs can work together with no impedance.

As the control signal info button, the client may pick the principal chip.

And the subsequent course chips will consequently perceive the yield signal produced by the primary chip that doesn’t influence the whole presentation impact. 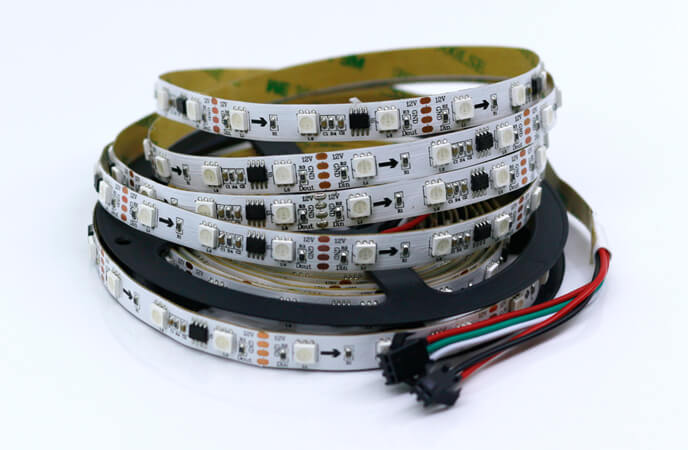 Besides the external IC, the other type is the internal IC, also called built-in IC or embedded IC.

You can see in the picture below that the black dot is a chip.

It’s individually addressable means each LED in one pixel can be programmed individually.

LED strips have one information signal just when one pixel bites the dust, so the sign cannot go through.

WS2812b just has 4 legs, however, there is an alternate parameter.

These two have only yields of 3 wires, they are informative and anode and also that don’t have clock ways.

So, we can say that they are not as quick as WS2801(an LED driver which is designed for indoor/outdoor LED displays.

This owns 3 LED channels with 30mA current each channel) revive will be moderate.

However, they can make more LEDs in a single meter LED strip, so it’s possible that there available are 30leds, 60leds 144leds per meter driven strip available.

We can also customize 72 LEDs per meter or other quantities on demand. 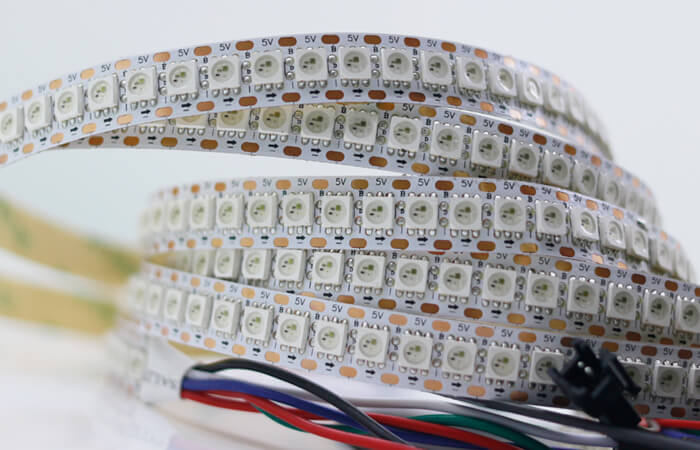 Such strips can be made with aluminum thwarting in an inflexible LED strip.

As expressed, past rates will rely upon the pace of waterproofing.

We can customize 48 LEDs per meter or other quantities depending on our needs.

WS2815 is an evolutionary version of IC WS2812 or WS2813 which not only adds the feature of break-point continuous transmission signal but it’s also a DC12V chip that is not of DC5V.

Higher voltage means it has a higher tolerance on voltage drop.

Voltage drop is the decrease of electrical potential along the path of a current flowing in an electrical circuit.

Voltage drops in the internal resistance of the source, across conductors, contacts, and across connectors are undesirable because some of the energy supplied is dissipated.

You need to learn more about voltage drop by yourself, this is usually discussed when speaking of addressable LED.

Some problems could be caused by this issue. 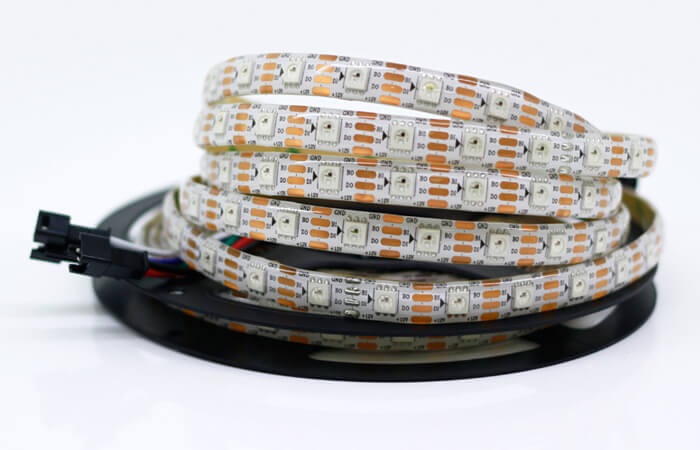 WS2813 is the latest model in this famous LED stripe series.

WS2813 is another DC5V built-in IC which is an evolutionary version of IC WS2812 which adds the feature of the break-point continuous transmission signal.

The big difference between the two LED strips is their bypassing LED property.

One of the main advantages WS2813 has over the WS2812B is that it is a dual-signal wires variant, with continuous transmission of signal break-points.

This means if an LED burns in the center of the chain, the circuit will remain closed and the other LEDs will still light up.

The remaining LEDs will continue to operate normally, as long as no other neighboring LEDs are broken.

While if an LED in a WS2812B strip is broken or burned, the circuit is broken and other LEDs in the chain afterward do not operate. 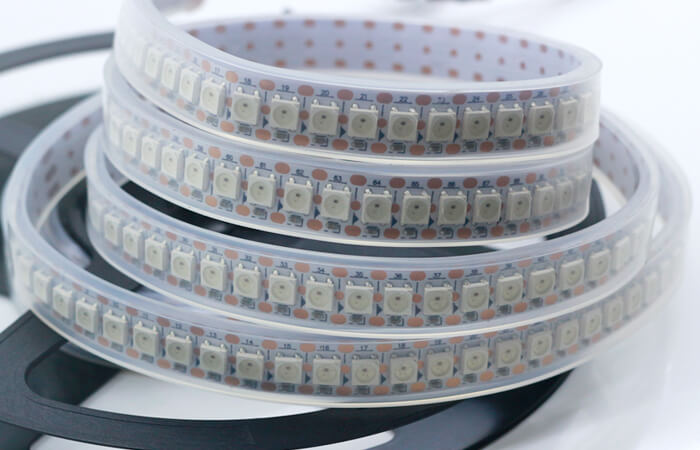 How to control WS2813 LED with Arduino?

From the FastLED library, you can control WS2813 LED Strips.

Use the type “WS2812” and set the LED strip by specifying the DATA PIN.

The LED strip’s DIN (data input) pin goes to Arduino PIN 6 with an optional 470 in between resistors.

GND of the LED strip goes to GND of the additional power supply and to Arduino’s GND.

Now connect the strip’s BOTH center pins to this pin and the stripe should work.

This is a simple introduction that how one can control WS2813 with the use of Arduino.

How to connect WS2813 LED with Raspberry PI?

Remember that you might be able to get your WS2813 to function without any level conversion, but it really assured because the data line needs to be at least 0.7*VDD (5 volts), or around 3.5 volts.

The diode method is a simple way to slightly reduce the voltage of the power supply so that WS2813 can read the 3.3V output of the Pi.

However, you need to be careful to use a diode that can accommodate all the WS2813 drawn current.

The Adafruit diodes sell only manage 1 Amp of the continuous current so they are perfect for driving up to about 16 of them at maximum 100% bright white-and about 50 WS2813 if they are all illuminated with different colors.

Also, because the LED WS2813 doesn’t operate at 5 volts they may be a little dimmer than usual.

A level converter chip like the 74AHCT125 is a better process, as it converts the Pi’s 3.3V output to 5V without limiting the WS2813 power.

Be careful that you can produce only one stripe at a time!

If you have more than one, connect them together and then wire them over a single connection to your Raspberry Pi.

The following wiring diagrams can be used to link your WS2813 to your Raspberry Pi.

It is very easy to wire WS2813 LED to work with a Raspberry Pi.

The only challenge to tackle is translating the GPIO from 3.3V to around 5V for the WS2813 to read.

You can do this level conversion in two ways, either with a basic 1N4001 power diode or with a level converter chip like the 74AHCT125.

How to control WS2813 LED with Adafruit?

This depends on the additional support components around the chip, based on the space, costs and most likely application available.

For guidance on acceptable voltage limits for each type please refer to the specific product description page.

Aim for 5 Volts when in doubt.

Lower voltages are always acceptable, with the suggestion that the LEDs are dimming a little bit.

There’s a limit below which the LED won’t light up, or start showing the wrong color.

However, it is rare for all pixels to be turned on this way, in actual use.

The current draw will be much fewer when mixing colors and displaying animations.

For all circumstances, it is impossible to estimate a single number, but we used 1/3 of this (20 mA per pixel) as a gross rule of thumb with no ill effects.

But if you know for a fact that at maximum brightness, you need every pixel on, use the full 60 mA figure.

To estimate power supply needs, multiply the number of pixels by 20, then divide the result by 1000 in Amps for the power supply rating rule of thumb.

The WS2813 Integrated Light Source is the latest advance in the search for a fast, portable, and affordable full-color LED.

Red, green, and blue LEDs are integrated into a small surface-mount package operated by a single cable, alongside a driver chip.

The first switch on the power supply, let the voltage stabilize, then link the pixels (first with GND).

However, it is uncommon for all pixels to be switched in this way, in actual use. 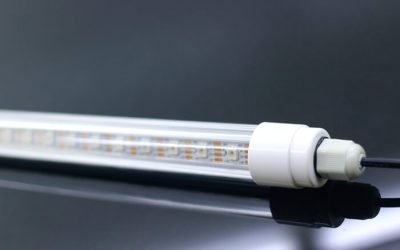 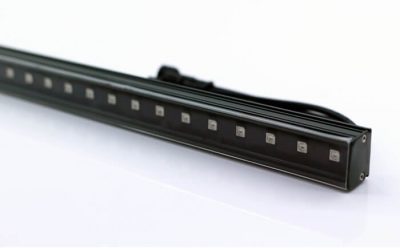 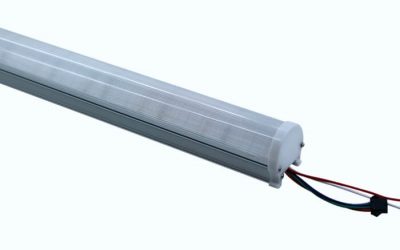 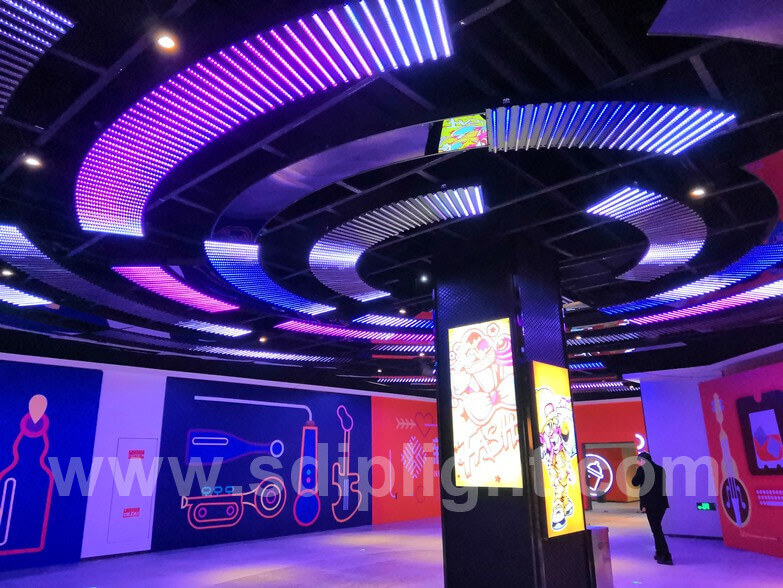 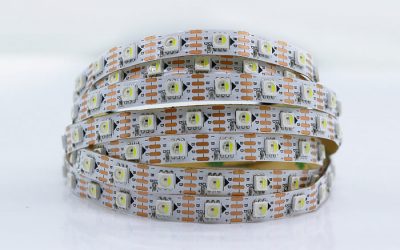 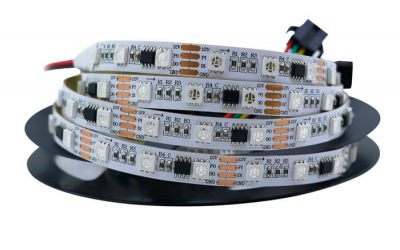 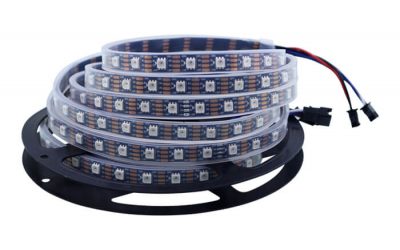 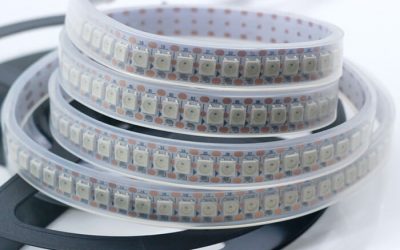 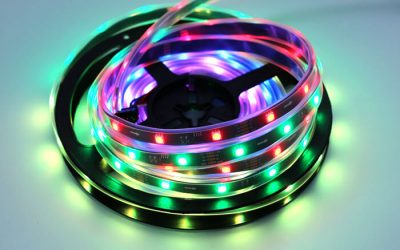 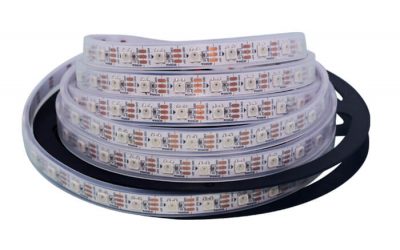 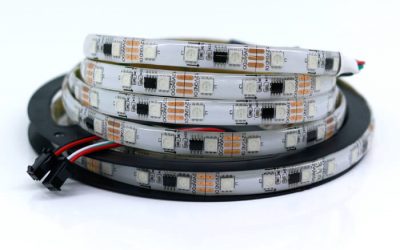 Working voltage is DC5V, max 5.5V
Each WS2813 LED pixel is individually addressable
All external components are integrated into the LED light source, sharply increase the convenience of installation and product stability
Signal break-point continuous transmission, any single failure pixel neither affects the other pixels nor overall display effect, nor waveform distortion
Transmission distance is 5 meters between any 2 pixels
PWM controller can adjust 256 gray levels, totally can output 16,777,216 colors 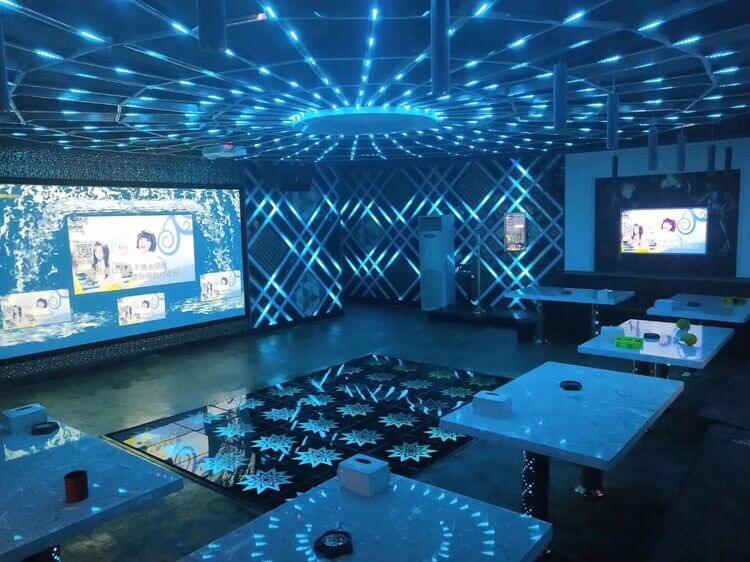